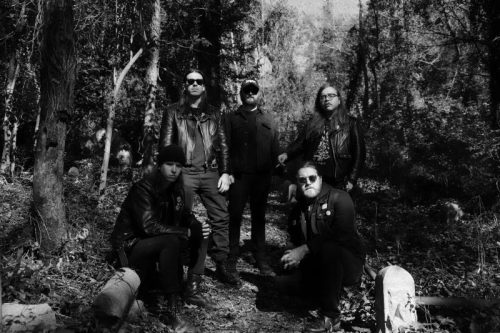 “Reckoning Force” comes off the band’s upcoming album At The Walls which will be released via WAR Records on July 19.

Enforced’s At The Walls LP features a remixed and remastered version of the 2017 demo and their “Retaliation” promo, and introduces two brand new songs to the mix. All tracks were recorded by Bob Quirk and mixed and mastered by Arthur Rizk (Power Trip, Cavalera Conspiracy, Candy), and the album’s cover art was created by Dwid Hellion (Integrity, Psywarfare) who makes a guest appearance on the track “Skinned Alive.”

Of “Reckoning Force,” Enforced vocalist Knox Colby states, “The lyrics mull about the effects of opening old wounds with friends and family for pride or over disagreements. A few lines hypothesize the idea of throwing everything away just to win an argument, leaving you isolated and bitter only to be crushed by an unforeseen force.”

On the songwriting for the track, guitarist Will Wagstaff offers, “This song was partially written with Isaac (Hullinger) on drums, and partially written with new drummer Alex (Bishop). We wrote most of the fast riffs with Isaac and then kind of put the solo part and intro together with Alex. I remember we modified the fast riff a bit once we had written the intro. We wanted to kind of have a ‘Pull The Plug’ (Death) style vibe during the intro and then bust into the fast riff. Both this song and ‘Skinned Alive’ definitely represent somewhat of a transition stylistically pushing into a more death-thrash direction where we’re going to be featuring more double bass parts, more intricate guitar play and thrashing slam riffs.”