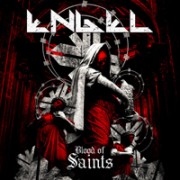 The Swedish melodic death metal band Engel announce that their third album Blood of Saints will be released on May 18th. The first single off of the album entitled “Question Your Place” can be heard via Season’s of Mist’s media player here. Swedish station Bandit Radio will also premiere the video clip of the song on Friday, April 13th.