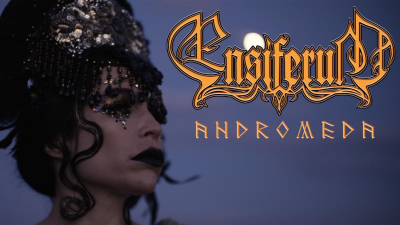 Finnish metallers Ensiferum have a new video out directed by Vesa Ranta and recorded on Rankki Island, Finland. The song “Andromeda” begins by warning of being too prideful as the band fire into their beloved melodic death metal influenced folk metal hybrid sound. I really enjoyed the chorus section of this song and the end when the energy really picks up.

The biggest difference separating new album Thalassic from the rest of Ensiferum’s catalogue comes from the fact that it’s the first of their albums to be built around a theme.

“The idea of it started to brew in my mind when I was doing interviews for ‘Two Paths’ and many journalists asked if it was a theme album, and I noticed that I was answering all the time that because of the way we compose it’s almost impossible to make a theme album. This really started to piss me off and the decision was made: the next album would have a theme. At that time, we already had a few songs almost ready for the next album, and I started to listen to the demos much more from the feeling aspect instead of analyzing them musically. For some reason, all of them took me to a seashore, and the theme was found: something related to sea or water. So I started to read about history, myths and legend around the world that had something to do with the theme, but even though all of the lyrics are obviously inspired by this, I tried my best to keep Ensiferum’s heroic mentality in them. In the end, there were too many ideas for lyrics, because I didn’t set myself any boundaries – like all stories would have to be Nordic, etc, and one of my favourite songs on the album tells about Andromeda from Greek mythology. I can’t promise that this way of lyric-writing will be the future of Ensiferum, but at least we did this once.” – Sami Hinkka