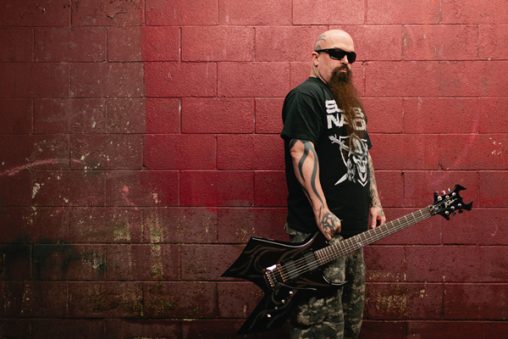 “The Breakdown,” a brand new, long-form video interview with Slayer‘s Kerry King, premieres today exclusively at AltPress.com.  Go HERE to check it out.

Produced by B.C. Rich, who endorses King, “The Breakdown” has a very candid King talking about his guitars, how he came to start playing the guitar, guitar heroes of his and for the generation of up-and-coming guitar players, being a fan and having that get in the way of “friending” some of his heroes, his friendships with Dimebag and Zakk Wylde, what he misses the most about Jeff Hanneman, and much more.

“I didn’t want to play guitar,” King reveals in the interview.  “My dad gave me a handful of things to keep me out of trouble when I was thirteen, the guitar was one of them and I think that karate was another.  I didn’t feel like getting my ass kicked every day, so this guitar thing sounds pretty awesome.”

In addition to the interview, AltPress.com has teamed up with B.C. Rich to give away one brand new Kerry King Signature guitar, the KKW30 model, with its unmistakable Kerry King styling and graphics.  Those interested in entering the sweepstakes should go HERE.

“It seems like the last ten, fifteen years isn’t throwing out new guitar heroes, which is unfortunate but I think that’s because the bands people like don’t have guitar heroes in them,” King says in “The Breakdown.”  “It’s discouraging, but I don’t think that should discourage people from becoming that next guitar god.”