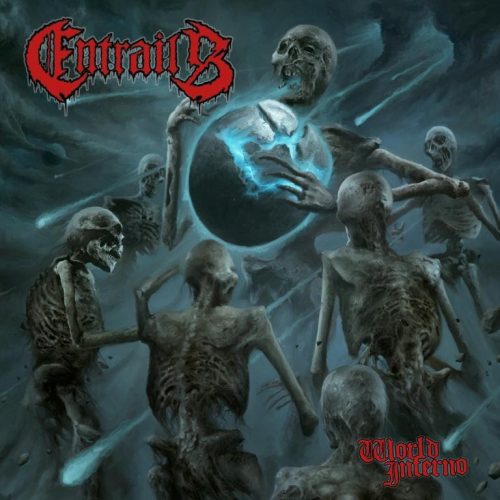 Swedish death metallers Entrails have released their latest single “Serial Murder (Death Squad)” off of their upcoming album World Inferno which is due out on June 16  via Metal Blade Records.

“It’s about time to unleash our next beast called ‘Serial Murder (Death Squad)’ – that means you should roll up your sleeves, loosen up your ponytail and get in the mood with a proper beer and prepare yourself for a trip among serial murders. The Death Squad awaits you!”

Dan Swano, who mixed and mastered the record had this to say:

“I don’t know if I had said this before, but I say it again. Every time I start thinking about putting together some new SweDeath project, Entrails show up at my doorstep with a new album to mix, and every time I think ‘Fuck!! – What’s the point in making my own project when this is so fucking good, and exactly what I wanted to do…’ And if I felt there were some details to improve upon from our previous work together, they fix that and then some, and return with an album even stronger than the previous one. What the fuck is going on in Linneryd!? Is Jimmy cloning death metal warriors in some barn over there or what!? To sum it up. Yet another amazing slab of SweDeath coming your way from Entrails! Beyond. Blown. Away!”

Head over to InvisibleOranges.com to hear “Serial Murder (Death Squad).”

Head over to Metal Blade to hear “The Soul Collector.”