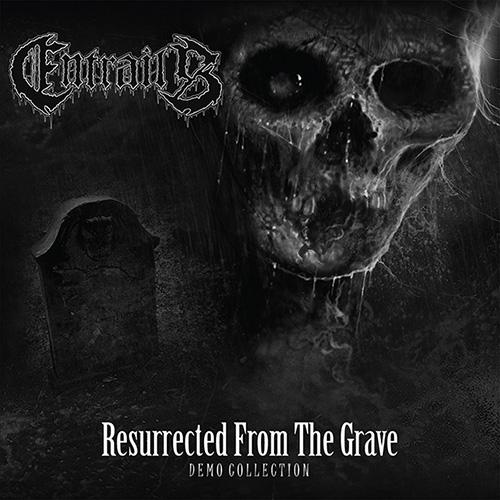 Look at this Gore-gous cover art!

Swedish death metal masters Entrails will release “Resurrected from the Grave (Demo Collection)” on July 22nd in North America!Head to metalblade.com/entrails to stream the first single “Blood Red” and pre-order your copy of the album.

I personally love these slimebags and think that, along with Coffins, they are a higher (mid) profile band that really do death metal right.

“Resurrected From The Grave – Demo Collection” contains the Entrails demos “Reborn” and “Human Decay,” features 18 total tracks, and will be released as a Digi-CD as well as on vinyl in Europe. In North American, the album will be available on CD and digitally.

Back in 2009, when the two Entrails demos were re-recorded and unleashed for the very first time, they were self released and homemade on CD-R and limited to 50 copies each. Back then, it had been decided that they would need to be re-pressed at some point in the future. Nearly five years after the first demo “Reborn” was unleashed – it’s finally time to release them officially via Metal Blade Records.

Entrails guitarist Jimmy Lundqvist comments: “It feels great to finally do something serious with the two demos from 2009, “Reborn” and “Human Decay.” After multiple requests from fans asking about the demos I had to release the brakes on this, now or never. While we are working on the upcoming new Entrails full-length, we feel better to do this release now which gives a bit more time for upcoming shows and the new album!”

The demo material is based on the ideas Entrails first worked on back in the 90’s in studio/rehearsal. For various reasons, they were never released back then and a few years later the band fell apart. Jimmy Lundqvist continued to write songs, riffs, and made sure to save them all on tape. Fifteen years passed before Jimmy decided to record these ancient relics with modern tools, computers, and some help from his brother in crime, Jocke Svensson on vocals. The first demo “Reborn” was recorded in early 2009 and the follow-up “Human Decay“shortly after in the summer of 2009.

Entrails most recent full-length album, “Raging Death,” was released in May of 2013 on Metal Blade Records and is available in stores and on-line now. For more information, to listen to music, read about the band, and order, visit the band’s page at metalblade.com.