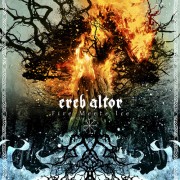 Best news of the day for metal is that October 15th will see the North American release of Swedish Viking/BM trio Ereb Altor’s latest Fire Meets Ice (via Metal Blade). Major props to Metal Blade for helping to expand Ereb Altor’s fan base. Hopefully this means the early records will all get wider distribution as well because they are all killer. They are one of my all time favorite black metal bands, ever since I heard the intoxicating cold yearning of 2008’s I Hate debut By Honour. Third album Gastrike saw the band move away from the more epic, slow viking material of By Honour and The End to a more violent and fast black metal sound but with equally powerful results.

Click HERE to read a Gastrike-era interview with the band I did for Metal Riot. And listen to new track/watch the lyric video for “Nifelheim” HERE.

“The Swedes have not forgotten their traditional elements. Hypnotic melodies and sweeping parts will be present again on the new Opus “Fire Meets Ice” that will see the light of day the summer of 2013. On this new album which will be unleashed by Cyclone Empire in Europe and Metal Blade Records in North America Ereb Altor will summon the Norse Gods again and take the best parts from each sound of Ereb Altor’s history to create a varied masterpiece.”

Well, I could not be more excited. This band is just unbelievable.