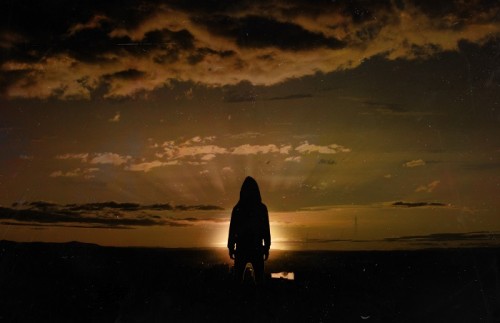 Glorior Belli are streaming “Lies-Strangled Skies” from excellent new Agonia Release Sundown (The Flock That Welcomes). The record is out May 6th but you can stream the newest dark single at Bandcamp HERE.

The album is killer, more black metal and speed leaning than the last record but with one real epic avant garde stomper as well, the highly recommended bass heavy “Rebels In Disguise”. “Upheaval In Chaos Waters” is another highlight, guitars positively gleaming with malice over roared, pained vocals and precision drumming. “World So Spurious” even has a bad ass Celtic Frost-esque death grunt that any metalhead will get pumped hearing.

“Lies-Strangled” skies is the opening track from this anticipated release, the perfect soundtrack to a reading of Paradise Lost or for burning down the house. The stage is set with a military beat building up faster and faster under a commanding guitar line before the album pulls you into a grand majesty of no return.

“The production is by far one of the best that Glorior Belli ever had” – comments the band. “Drums & Bass are absolutely devilish and placed under the spotlight. Everything was recorded, mixed and mastered in our own studios, having an absolute control as usual over the sound. The guitar work overall will bring you back to the origins of Glorior Belli. Conceptually wise, Sundown (The Flock That Welcomes) will smother you with darkness and light, both stuffed down your throat with the same rage that could be heard on Glorior Belli’s ealier records. When the Night is coming down on you, will you find a way through the dark? A record for the very few of us who truly embrace the desire to break from the cosmic prison”.