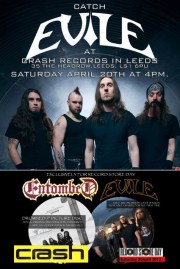 Swedish death metal meets British thrash for this years Record Store Day when Entombed and Evile release a split 7″ picture disc in celebration of the event.  The vinyl will feature the classic Entombed track “Drowned” as well as Evile’s 2012 cover of the same song.  The disc will be available at independent record stores on April 20, 2013.

Evile will also be making an appearance at Crash Records in Leeds, U.K. to help with the festivities.  Tickets are limited, but if you buy the split from Crash on the day of, admission is free.  Evile drummer Ben Carter had the following to say about the event and collabo:

“Evile are looking forward to making some stupidly heavy noise at Crash Records in Leeds on Saturday, 20th April in support of Record Store Day! We’re going to start destroying ears at 4 p.m., so make sure to get in early as space will be VERY limited! We guarantee this show will be utter carnage and something very different than the norm. We can’t wait to see how a circle pit will work in a record store and need our fans there to show us!!! To mark the occasion, we’ll be selling our new exclusive 7″ split of our cover of Entombed’s ‘Drowned’, with Entombed’s original on the flipside. All this is to show support to indie retailers, so get yer asses down to Crash and show your support for the old school!!!”

Record Store was kicked off back in 2008 by Metallica and takes place the third Saturday of every April. It’s basically so independent record stores and artists can collaborate with special limited edition releases and special events. It really helps promote small shops and their love of the music.