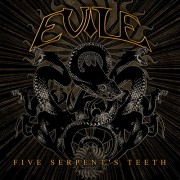 UK thrash metal act Evile are among the latest groups to be confirmed for this year’s edition of Bloodstock Open Air, a dedicated metal festival held annually in Derbyshire, UK.

The band will be performing on the Sophie Lancaster Stage on Sunday, 12th August, and join a line-up of bands such as Testament, Sepultura, Behemoth, Alice Cooper, Deicide and many more.

“It was great to wake up to the confirmation of our appearance at the one and only Bloodstock Festival. With the release of our Five Serpent’s Teeth album, we dedicated the track ‘Centurion’ to the festival, and for them to have us back with a great slot on the Sophie Lancaster stage, it’s bound to be a show to remember. We may just even have a special, first time live-airing of the previously mentioned track for the BOA masses. Come along for your Evile fix! Long live Bloodstock!”