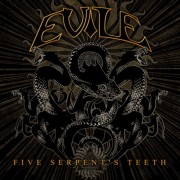 British thrashers Evile have recorded a special cover version of Nirvana’s song “Lounge Act” from the legendary 1991 album Nevermind, as part of Kerrang! magazine’s special anniversary issue to commemorate 20 years since the release of the album.

Evile were among fourteen bands who were asked to record a cover version of one of the tracks from “Nevermind”, and the band were more than pleased to leave their mark on “Lounge Act”.

“So the cat is out of the bag; Evile have covered ‘Lounge Act’ by Nirvana for Kerrang’s upcoming anniversary issue of the ‘Nevermind’ album. When we got the offer all I could see was fun to be had, and what an honour it was to be included. I was a big fan of Nirvana when I was a young teen, so it’s an extra honour in that way for me. I wondered what we could do to the track to make it our own, so we approached it like we would one of our own songs. That bass riff is brilliant and I wanted to make it more a core element of the track guitar-wise and just metal it up in general. I wanted to respect the approach of the song but also alter Kurt’s chord approach to a style more suited to Evile, and that’s a chug-athon! Hope you all enjoy it; we definitely do. Cheers to James McMahon and all at Kerrang!”

The commemorative “Nevermind” covers album is included free with this week’s Kerrang! magazine in the UK, which is available in shops now.

Evile’s new album, “Five Serpent’s Teeth,” is due to be released on September 26th in Europe and October 18th in North America via Candlelight Records.