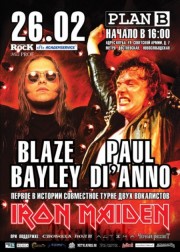 Paul Di’Anno and Blaze Bayley, two former singers of the mighty Iron Maiden have been touring Russia together since February 22 and made a stop in Moscow this past Sunday.  Some fan filmed video have shown up on Youtube and although the sound is low quality they are worth a watch.  They can be seen here along with a short press conference.

Paul originally fronted the band when they first became popular in 1978 through 1981. He was eventually fired for allegedly being a huge coke head and an alcoholic to the point of missing shows.  Paul denies it all and has been on tons of albums since leaving the band while continuing to release music to this day.

Blaze replaced Bruce Dickinson in 1994 as Bruce embarked on his solo career and was eventually asked to leave because he couldn’t sing good enough for Maiden.  He also denies these charges and claims that they asked him to perform songs outside of his natural vocal register.

Bruce Dickinson later rejoined the band and has gone on to do things such as fly the band around in their own personal jet and hang out on a nuclear submarine.  More or less all has become well with the world.

There is a lot of history with this band and they are currently about to release a DVD set called En Vivo! on March 26, 2012 that you can read more about here.

NOFX – “Eddie, Paul, and Bruce” a short punk song on the history of Iron Maiden: