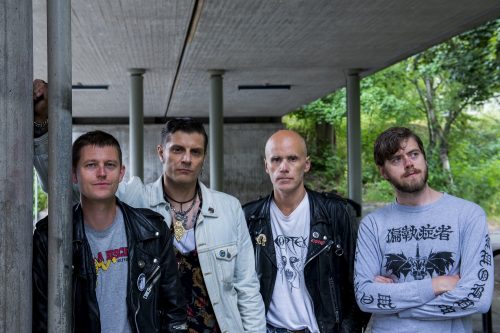 Armageddon Label will release the debut EXIL release on July 23rd, a whirlwind of social commentary in the form of Swedish hardcore. 11 tracks, 26 minutes. Gnarly! Hear the rip roaring and speedy “Maniac” on the Greetings from Sweden – Quarantined Hardcore vol 1 compilation HERE.

Interesting snippets from the press release:

Three quarters of the band are born and raised Umeå Hardcore. Their paths have crossed before, going back some 25 years (see below). But EXIL are based in Stockholm. It’s a hellish neo-liberal experiment of a capital city: Ayn Rand’s own privatized garden of lust, or an even shittier 50 Shades of Grey with Rich Uncle Pennybags-gone-Pinhead as the dom and we, the people, as the subs.

EXIL play fast, stupid music with smart lyrics permeated with a sense of alienated bleakness. Much of the lyrical bantering deal with the above, life in the big city, and the mind-shattering daily life of modern Western society. It exposes how economic injustice is expressed in an urban environment, with parasitic landlords and immense gentrification that pushes all culture that doesn’t conform to lame middle-class norms to the absolute periphery of cities like Stockholm.