Exmortus premiere “Death To Tyrants” lyric video via Revolver, want to call you at home 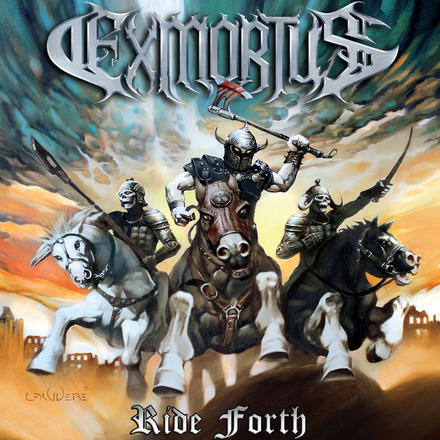 As many readers of my bloody quill scribbles know, I tend to prefer to write about bands I like then give more press to bands I think suck or who are assholes, unless they have personally wronged me in which case I will take them to task with a vengeance. Exmortus are a band I have zero complaints about and they seem to be quite diehard, just out there to kick ass and support metal’s growth like Battlecross, Napalm Death or other bands who live to tour and hit it hard and true with a stake through the heart of poseurs.

Exmortus are one of my favorites in the modern metal scene and I can firmly get behind their sentiments in “Death To Tyrants”. a killer new Ride Forth track which has a new lyric video premiering at Revolver HERE. The Exmortus bunch are sounding ever more Skeletonwitchy meets Exodus to me, but it aint like that is a bad thing at all. The song has the same name as one of the best newer Sick Of It All albums but we’ll let that slide this time.

Basically, if only this song came with donuts it would be perfect.
Be one of the first 300 customers to pre-order “Ride Forth” on CD, LP (black, red or smoke variants) or bundled with a t-shirt, long sleeve or zip-up hoodie from the Prosthetic webshop and you’ll receive a phone call from one of the band members! Order it now: http://store.prostheticrecords.com/bands/exmortus