Extremefest to feature Belphegor, Exodus, Cannibal Corpse, and others 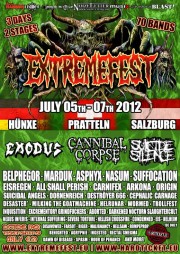 The world ends July 5th-7th as the European death/black metal fest Extremefest brings one of the darkest, crushing line-ups to  Germany, Austria and Switzerland.  Extremefest will feature around 70 bands including Belphegor, Exodus, Cannibal Corpse, Suicide Silence, Aborted, and more.   For passes and more info, visit the official website of the fest.  For a video trailer of Extremefest 2012 click here.