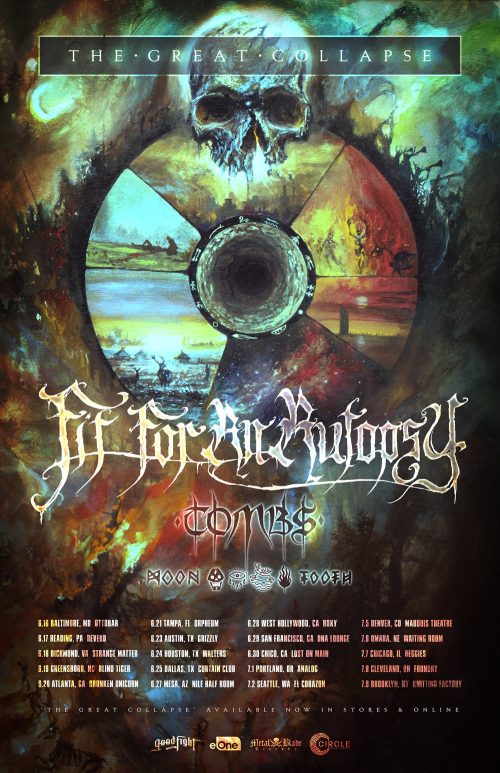 FIT FOR AN AUTOPSY have announced The Great Collapse North American tour in continued support of their new LP of the same name. Support will come from TOMBS and MOON TOOTH. Dates kick off in early June and stretch through the first week in July. Tickets will go on sale Friday 4/21.

“We’re happy to announce The Great Collapse North American tour,” says vocalist Joe Badolato. “Tombs and Moon Tooth are sick live bands, and make for a fun mixed bill. A little different than our normal touring partners, but we’re excited to play for some new fans. Lots of new songs on this one, and a few old ones we haven’t pulled out in years.”

Fit For An Autopsy released The Great Collapse on March 17, 2017 via Entertainment One (eOne) / Good Fight Music in North America and SPV overseas. Initial sales of the album landed the band on a variety of Billboard charts, some of which the first time in the band’s career. The Great Collapse debuted at #6 Hard Music, #9 Indie, #16 Rock and #47 Current Top 200.

More News On Fit For An Autopsy:

More On: Death Metal, Tour, Fit For An Autopsy, E1 Entertainment
share on: