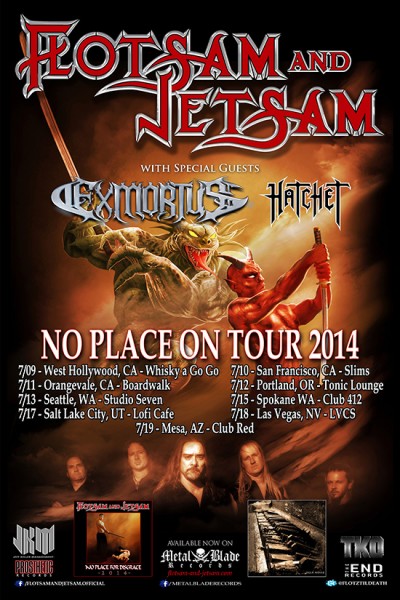 Legendary thrash metal act, Flotsam and Jetsam, are set to return to the road this summer with thrash newcomers, Exmortus, along with be San Francisco’s Hatchet as the opening act. “No Place On Tour 2014” will begin on July 9th in Hollywood, CA at the world famous Whisky a Go Go and wraps up at Club Red in Mesa, AZ on July 19th. The full list of dates are available below.

Drummer Kelly Smith comments: “We are psyched to be hitting the west coast again in support of both Ugly Noise and No Place for Disgrace (2014). Coming right off the summer festivals in Europe we will be fired up and ready to shred. With the addition of Steve Conley(F5) and the return of Michael Spencer it promises to be a killer show.”

In April of 2013, Metal Blade released “Ugly Noise,” the band’s eleventh full-length album, their first release on Metal Blade since 2001, and the follow up to their 2010 album, The Cold. The record also marked the return of original members Michael Gilbert on guitar and Kelly David Smith on drums, who had not recorded with Flotsam and Jetsam since High in 1997. To purchase this album, as well as Flotsam and Jetsam merch, visit indiemerch.com/metalbladerecords.

More News On Flotsam and Jetsam: