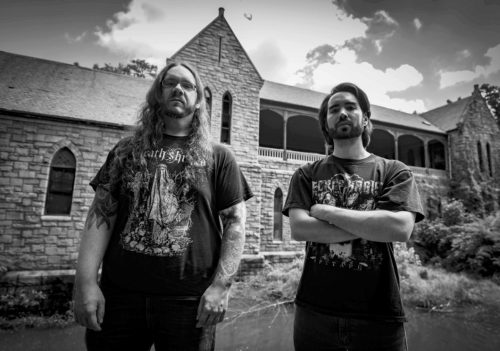 Prosthetic Records have teamed up with Virginia’s ambitious Foretoken to release Ruin, a blend of folk, death and black metal styles.

Dan Cooley commented:
“The record’s release brings an equal mix of excitement, anticipation, and anxiety. We’ve spent the last almost two years writing and obsessing over every detail of the album. There are definitely some things we’ve learned throughout that process which we will incorporate in the next record, but for now we’re confident our debut, Ruin, is everything we wanted it to be: cinematic, energetic, and at times melancholy. We hope everyone enjoys the album and we want to thank everyone who supported us early on through Bandcamp.”
Bandmate, Steve Redmond added:
“We’re super excited for everyone to hear the album. This project started as nothing more than a “bedroom studio project” that would’ve probably never seen the light of day and evolved into something much more. This is my first time writing a symphonic metal record and it has been incredibly fun. It has also been a learning experience. With Ruin we really want the listener to be able to go on a musical journey through these myths and legends. We hope we were able to capture that with this record. We hope everyone has as much fun listening to Ruin as we had making it. ”

During the creation of Ruin, the pair enlisted Hannes Grossmann (Triptykon, Hate Eternal, ex-Obscura, ex-Necrophagist) on drum duties. The album also features James Malone (Arsis) in a dueling guitar solo on the track A Deathless Prison, and was mixed by both Steve Redmond and Jacob Hansen; with mastering being done by Jacob Hansen at Hansen Studios. Jacob Hansen is a renowned producer/engineer who has worked on albums such as The Black Dahlia Murder’s Nightbringers and Fleshgod Apocalypse’s Veleno. The album’s art is a piece by Tomas Honz entitled Fallen Empires .