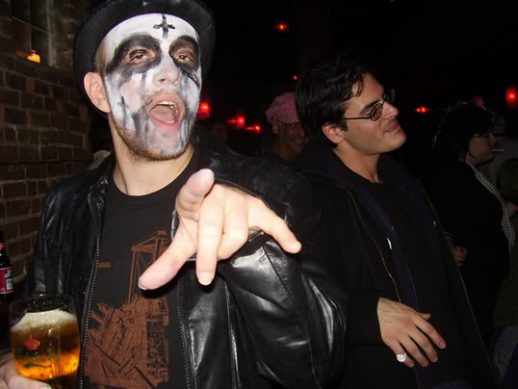 Blah Blah Blah. New feature around here henceforth shall be talking to an artist about five records that were very important to them as they grew their first baby bat wings. Since it is 7:50 AM and I can’t just magically have answers from Ola Englund or Scott Hull in my back pocket moments after conceiving this column, I will go first myself to kick off this edition.

As some of you know, I not only do the majority of heavy lifting around here for Metalriot.com but have also been a singer for over 20 years in the Hudson Valley, NY region. We have had many bands and musicians come from or settle here. Coheed, one of the dudes from Bask, Shai Hulud (originally from Florida, I know), All Out War, Nightmares For A Week, Three, Pitchfork Militia, Geezer, Diet Cig, Casting Ships, Painmask, Clover, Shadow Witch. Even one time pretty big ska influenced bands like Perfect Thyroid and Conehead Buddha. Take your pick. There are a lot of ’em old and new.

A great part of growing up here was being immersed in a deep well of creativity so close to Woodstock, NY and many varied tastes. You also were close to the Albany and Poughkeepsie hardcore scenes and a lot more. I am currently focused on my solo/collaborative work as Walking Bombs , which allows me to do whatever genres I wish with various friends or solo. The next wave of material is gonna up the ante on some of the punk and sludge/grunge influences, but I just released an album called Brave Hours that is more on the alt rock/post-punk side. I also used to sing for many other bands from Fuse to Divest to Pontius Pilate Sales Pitch and Antidote 8, to name a few.

Some of you know me. Others don’t. Perhaps you might find it interesting to know some records that inspired me to do what I do everyday. Don’t fret. I will find some more famous people for future entries, hahaha.

5. The Sex Pistols’ Never Mind the Bollocks, Here’s the Sex Pistols is the first punk record I can recall encountering. I’d end up loving the NY stuff like Ramones better in the long run, but this album is beyond classic and has such a great rock n’ roll side to the playing as well. The sense of freedom and , um, anarchy to the music still catches my breath no matter how many times I’ve heard it over the years. You never forget your first. My friend James who I played D&D with had this and I must shout him out for helping me down a path to future bankruptcy.

4. Sepultura – Chaos A.D.  I got into like Guns N Roses before this and stuff but this was one of the first very heavy records I can recall getting into. It was on a tape along with Agnostic Front that my friend Jeremy dubbed for me. I think it was taped over like Garth Brooks or something, haha. Anyway, the tribal side of Sep and the low end bass mixed with the threat on a global scale perspective made me think how music could be very political. Jello Biafra guesting on the album as well showed how punk and metal could be allies and that opened my mind a lot in ways that eventually have led to me really believing in the scenes we have now. I think Beneath The Remains is currently my fave Max era album with the band, but this one changed my life the most.

SY were a revelation for me for the unity between the sexes (this was long before I learned about other genders), and their undying belief in the underground and art scenes being able to co-exist. There wasn’t much barrier between high and low brow art in their world, it seemed. They just wanted authenticity and were able to inject it into the mainstream. Some people say that allowed things to be co-opted but I for one think things would have been sooo much worse without them. Look at what we face now with Christo Fascism and Trumpism. Having ambassadors of cool might sell a few sodas sometimes but if they are more authentic than not, you are gonna get some truth and beauty into regular day discourse. I have always believed that is vital since. Plus, those tunings!!!  I think in my scene there were like the kids like me who dug Nirvana and SY and Melvins a bit more and then the Shabutie guys were more like the Smashing Pumpkins, Janes Addiction, Sunny Day type dudes – and we would just all wild out and share records and debate shit. That was cool.

David Yow was a huge influence on me believing as a front person for many years that “I can never get any rest” (to quote “Fly On The Wall”). I believed you had to be a half naked maniac at every chance and roll around until you puked. While also inserting as much wordy poetry into songs and half revealed very personal things. Eventually I would develop a lot of other approaches, but Yow’s physicality regardless of his size was a huge motivator for me as a skinny, enby weirdo rocker to fling myself into even insane hardcore or Crowbar pits.