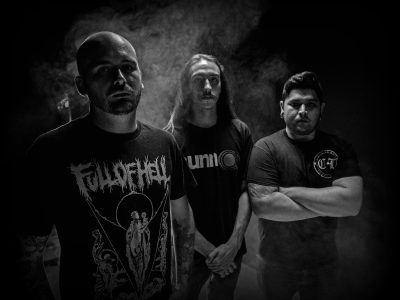 SEEKER has been perhaps the coolest band on Victory for awhile now, completely uncompromising and out to craft their own approach. Bryce stops by today to take part in our latest edition of Formative Years!

Read BELOW for five records that molded his approach to chaos!

Master Of Puppets by Metallica

I feel like this or …And Justice for All would be on anyone’s list, but it doesn’t change the fact that this is arguably the greatest heavy metal album of all time. This is the album that changed everything for me. Hearing the locked in alternate picking and thrashy ass drums on “Battery”, “Disposable Heroes”, and “Damage Inc.” are where my obsession with speed and musical aggression came from. “The Thing That Should Not Be” and “Leper Messiah” are still some of the heaviest songs I’ve ever heard. This is the album that showed me what metal could be. It put me on the path to finding death metal and doing any of the things that I have been able to do in the music industry. I still get just as excited when this comes on as I did the first time I heard it.

There isn’t an album on the planet that I’ve listened to more than this one, which makes it kind of funny that I absolutely hated this the first time I heard it. I had no frame of reference for what was happening at all. I had never heard music that was so completely unhinged, spaztic, and technical. Gradually though, as my friends convinced me that I was missing something I gave it more tries and began to wrap my head around the serious genius behind this album. To me this is one of the most ground breaking, unique, and honest records ever made. This sent me down a years long rabbit whole of finding the most bizarre and extreme music that I could and totally ruined my ability to write anything normal ever again. Calculating Infinity is the sound of absolute musical freedom.

Through Silver In Blood by Neurosis

This album is 21 years old and I have still never heard anything that comes close to it’s terrifying, crushing, heaviness. I was hooked from the first time I heard “Locust Star”. Everything about that song, the tribal sounding tom rolls, the bending, monstrous guitar riffs, the unbelievably raw vocals, connected with me immediately. This is as bleak, massive, and heavy as it gets. Everything about my vocal style and the way that I approach the guitar has been hugely influenced by this album.

F#a#infinity by Godspeed You! Black Emperor

There will never be another band as mysterious, original, and powerful as Godspeed You! Black Emperor. Their songs ooze with an eerie, bleak, and undeniable intensity that, despite the fact that they are certainly not “metal”, makes them one of the heaviest bands of all time. Where Neurosis crushes the audience with their brutality and volume, GY!BE tears into the listeners soul. I will never see another live show like theirs. Total silence during every pause. People sobbing. The indescribable feeling that this band creates with its listeners is wholly unique to them. This album influenced the way I approach live shows, visual aesthetic, and the way that even in extreme music, vibe and feeling are incredibly important. Godspeed is the band that I always look to when I think about how I want my band to feel.

I remember the day that I bought this album because it was the day I said to myself “Fuck it…I’m going to do music and that’s it.” Everything about this album is remarkable and redefined what a band could do within the context of extreme music. “Future Breed Machine” is one of my favorite songs ever. Period. The sickening, discordant feel of “Soul Burn” never gets old. The lyrics to “Terminal Illusions”… This album continues to blow me away every time I listen to it. There are riffs that years later, I’m still trying to comprehend. This is an album that I will always have in rotation.