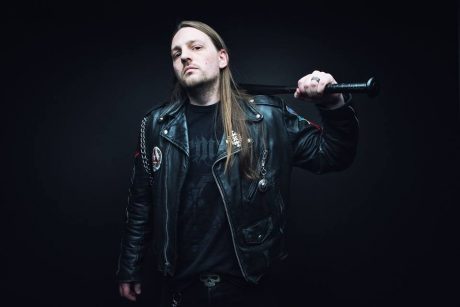 IKILLYA‘s star is deservedly rising after considerable effort in the trenches of trashitude. With the band about to drop new album War For An Idea, I caught up with my friend Jason (vocals) and asked him five records that shaped why he has chosen the path of metal devotion. This is the second of our new “Formative Years” column (I did the first one here if you care). Jason’s rad picks (he settled on six) as well as the band’s top notch thrash-core clip for IKILLYA’s “Betray Your Creator” (RIYL Lamb of God, Byzantine, Testament) are below.

“5 Albums That Inspired Me”…This was damn hard. I could easily get to 10, but since I only get 5, I had to do 6. So many things have inspired me in the last 15 years to continue my journey, but below are 6 albums that massively changed my life, up until 2000. Ha. – Jason

The Beach Boys were the first band I really loved. When I was a kid I wasn’t allowed to listen to modern rock so I listened to oldies and I love the melodies, harmonies and song structure from these guys. This album is still one of the best ever in my opinion. I have drawings that I made in 3rd grade of each of the instruments in a band and who of my friends would play each. Somehow there’s a flying V in there. No idea where I saw that but I clearly had good taste young.

In the late 80s my family moved into an apartment complex and I was able to get access to music I didn’t know existed. The first time I heard “You Give Love A Bad Name” I was locked in. Game over. No more considering being an air force pilot for me. Rock N Roll stole my soul. I remember taking the cassette of New Jersey to my parents and showing them the picture of Jon’s hair because that’s what I wanted. I haven’t had a haircut since that day.

Shortly after discovering Bon Jovi I discovered Metallica and Guns N Roses. Honestly, those bands should be on this list also, but I put Testament because this album resonated with me in a way others hadn’t. With GNR and Metallica I didn’t know if I wanted to play rock or metal, or somewhere in between. When I heard The Ritual, I knew it was metal.

A friend of mine let me borrow his tape of Vulgar my freshman year of high school. I had already been jamming the thrash godfathers for several years, but this album immediately took over. I remember sneaking out of an Arby’s on a school field trip to run across the parking lot and use my lunch money to buy Cowboys From Hell. Vulgar was every single thing I wanted in metal. Power, groove, aggression and melody – all in exactly the right balance. From then till the time Pantera broke up, I never missed a single one of their concerts.

Metal was unquestionably my passion but there was part of me that still loved to sing – and it just didn’t fit in – until I saw Fear Factory. They were the opening band on a Megadeth/Korn/Flotsam and Jetsam tour while supporting this album. I had never heard of them before but they absolutely blew my socks off. Burton was the first person I’d ever heard mix clean singing with metal and it changed my life. No exaggeration.

6.Killswich Engage Alive Or Just Breathing
The late 90s were a strange time as many of the Thrash bands tried to be death metal and because I lived in Indiana, the Scandinavian wave never reached me. I played in a power/trad band and then a band that I thought was very Megadeth, but was really more Sevendust. Nothing wrong with that as I love Sevendust, but I kept getting further from the aggression that is core to who I am. When I heard “My Last Serenade”, it brought me right back in line. Within 3 months I had done my homework, found all the Scandinavian bands and I was off to the races. Thanks for letting me share these albums, and we’ll have to do a part 2 some time so I can keep going!

Catch IKILLYA on tour all over the US this summer! w/ Skinlab & Product of Hate