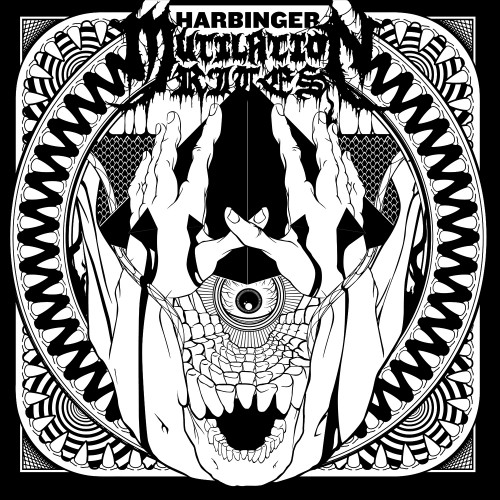 I wasn’t blown away by Mutilation Rites at first when they came out, but the band have definitely grown on me big time. I think I was just on a Holy Grail kick at the time and so wanted to, like, only hear that sound. Once the widdly widdly woaaaah dust settled a bit, I was able to actually give Mutilation Rites the attention they deserve and realized they kick major ass. I think being at Saint Vitus Bar and hearing staff members rave about them helped as well.Since then I have become a real fan. “Suffer The Children” has been tearing up my speakers of late.

The Brooklyn based charred death bringers will deliver Harbinger in North America on July 22 via my favorite metal label Prosthetic Records. The mind-bending cover artwork by artist Valnoir (The Black Dahlia Murder, Watain, Nachtmystium) is featured above. Head to NOISEY now to take a listen to the album track “Contaminate,” or take a listen via SoundCloud HERE.

Described as a “nightmarish merger between black, death, d-beat, and doom” with “a compelling sense of chaos” (Pitchfork), “Harbinger” was once again recorded with Kevin Bernsten (TRIAC, Magrudergrind) at Developing Nations, while the album’s mastering was completed by vocalist/bassist Ryan Jones (ex-Today Is The Day) alongside James Plotkin (SunnO))), Isis, Pelican). Pre-order “Harbinger” now on CD, LP (available on either 180-gram black vinyl or Black/White variant) or Cassette bundled with an exclusive t-shirt design today from http://store.prostheticrecords.com/bands/mutilation-rites