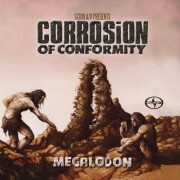 North Carolina heavy metal veterans Corrosion Of Conformity are currently offering their new EP Megalodon for free download.  The band released a video for the song “Feed On” which you can view by clicking right here.

Megalodon followed the successful release of Corrosion Of Conformity’s self titled Candlelight Records release in February 2012.  The EP was released in November 2012 via Scion A/V and was recorded in the band’s hometown of Raleigh, North Carolina.  C.O.C. guitarist Woody Weatherman had this to say about recording Megalodon:

“We did that in our hometown of Raleigh, North Carolina, which is kind of nice, to be able to hang around in town and not have to go out somewhere, go to L.A. or New York. Sometimes it’s nice to record at home. You get a little better vibe. Plus I got to use all of my own gear. So it was fun.”[youtube]http://www.youtube.com/watch?v=QmYoObqenTU[/youtube]