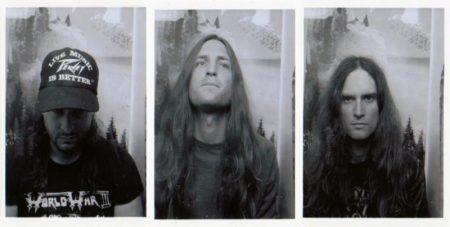 Hey there ya headbanging tree-huggers, if you can’t be in London protesting Trump or can’t fit into a  soon to be outlawed as “Antifa” Jason Voorhees mask you might as well hang out here with us at Metal Riot. So let’s get this party started!!! Are you excited? No? You ought to be. New music time!

New Gods is the forthcoming new full-length from Canadian heavy metal trio CAULDRON. Slated to drop September 7th via The End Records in North America and Dissonance Productions in Europe, the band’s fifth full-length and follow up to the critically-lauded 2016 album In Ruin was captured by Chris Stringer (Timber Timbre, Wooden Sky) at Union Sound in Toronto.
This band always delivers in the larger than life memorable song department and pack a punch, so I am really looking forward to them giving us new stuff. “Letting Go” gets your blood running from the get-go with an incredible intro riff and plenty of thrills for classic metal types and Sabbath disciples. This song reminds me of a mix of Vol. 4 and Seventh Star through the Cauldron vapors.
In advance of its release, Decibel offers up a first taste of the record with “Letting Go.”
Offers founding vocalist/bassist Jason Decay, “‘Letting Go’ is one of the first tracks that came together for the new record. We really couldn’t deny the melody found in this song and I think somehow it still sounds very CAULDRON… once in a while you just have to rock and roll the bones. I am very proud of the songwriting, performances, and production on this one,” he continues, “and it is definitely the most confident I have been in a finished album of ours. It’s dark, it’s heavy, and it has a very melodic sense of AOR. I’m pretty sure people who were into In Ruin will like this one just as much if not more!”
Hear “Letting Go” at Decibel at THIS LOCATION.
CAULDRON’s New Gods will come available in CD, digital, and vinyl formats. For preorders go to THIS LOCATION.
In conjunction with the release of New Gods, CAULDRON will be playing a handful of US shows in September with support provided by Barrow Wight. The band has also confirmed a special record release show in their hometown of Toronto set for September 15th at Junction City Music Hall. Click HERE for more show and ticket info.
CAULDRON:
9/06/2018 The Middle East – Boston, MA w/ Barrow Wight
9/07/2018 Boot & Saddle – Philadelphia, PA w/ Barrow Wight
9/08/2018 The Kingsland – Brooklyn, NY w/ Barrow Wight
9/15/2018 Junction City Music Hall – Toronto, ON 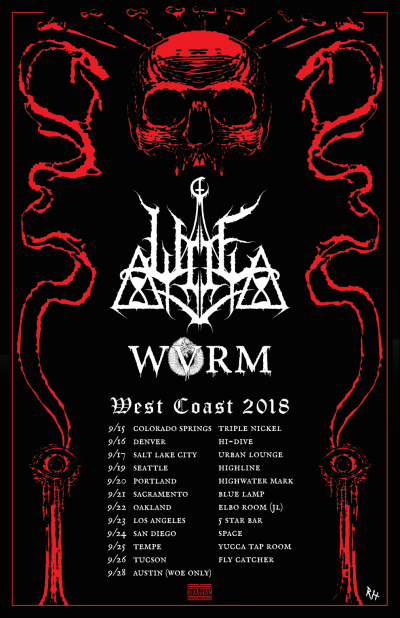 Black metal force to be reckoned with Woe are a bright light in a dark genre, one of the most rewarding acts in extreme metal. We stan 2017 return to the fray Hope Attrition almost as much as Chinese Democracy around here, which is to say…a bunch! Seriously, they are brilliant and fierce, pushing their art further into blackened hallways of rebirth and the strive for something tangibly real. Love it.
The band have announced a twelve day tour that begins in Colorado Springs on September 15th, my sister Cambria’s birthday (incidentally). Joining Woe for the tour will be Greenville, SC grinding death metal outfit, WVRM.
“Wvrm is a band that brings an uncompromising AGGRESSION that we truly appreciate and connect with. We’re glad to be fighting on their side” comments WOE frontman, Chris Grigg.
Woe, WVRM Tour dates:
9/15 – Colorado Springs, CO, Triple Nickel
9/16 – Denver, CO, HI-Dive
9/17 – Salt Lake City, UT, Urban Lounge
9/19 – Seattle, WA, Highline
9/20 – Portland, OR, Highwater Mark
9/21 – Sacramento, CA, Blue Lamp
9/22 – Oakland, CA, Elbo Room
9/23 – Los Angeles, CA, 5 Star Bar
9/24 – San Diego, CA, Space
9/25 – Tempe, AZ, Yucca Tap Room
9/26 – Tucson, AZ, Fly Catcher
9/28 – Austin, TX, TBA (Woe only)