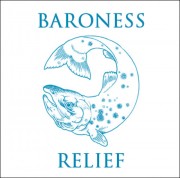 As everybody should know, Savannah, GA metal band Baroness, were involved in a serious crash outside Bath, England in August of 2012 and with the band unable to play and medical bills adding up their friends and family have established a charity auction. The exact details aren’t set in stone but the auction will include items from the bands Kylesa, Neurosis, Meshuggah, Red Fang, Mastodon, Municipal Waste, Earthless, Napalm Death, and more.

We will keep you posted but you can look at the details as they stand here.

The band’s sound engineer Loopy Fiasco and label rep Rennie Jaffe explained their intentions for establishing the fund:
“We set out as friends of the band to do whatever we could to alleviate the band of their medical expenses and loss of income in their time of pain and journey back to being able to play again. All proceeds from this auction will be given directly to the band and crew affected in as transparent way as possible. No one involved with organizing this will or wants to make any money from this event.”