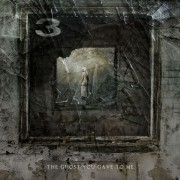 Tomorrow, October 11th, sees the Metal Blade Records release of the new album from Woodstock, New York’s 3. Fans can get a glimpse of the full album, entitled “The Ghost You Gave To Me”, right now, currently streaming in its entirety courtesy of AOL Music. Just click here.

Additionally, the band has confirmed that they will be touring North America this Fall as direct support to Cynic. The tour kicks off November 3rd in West Chester, Pennsylvania and wraps up November 23rd in Hollywood, CA at the Key Club. Click here for an entire listing of tour dates.