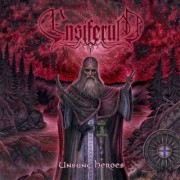 Finnish pagan/folk metal legends Ensiferum are streaming their brand new album Unsung Heroes for 24 hours only, so get to listening.  The album was released today on Spinefarm Records, is the band’s fifth album and the follow up to 2009’s From Afar.

A recent press release had the following to say about the album:

(Unsung Heroes)”sees the Finnish five-piece — founded in 1995 — pushing their signature sound to bold new heights of drama and excess. A cinematic experience from first note to last, ‘Unsung Heroes’ takes the listener on a journey of genuine light and shade, with the 16 minute-plus ‘Passion Proof Power’ showing that when it comes to the epic statement, Ensiferum are very much in the front-line, swords at the ready.”