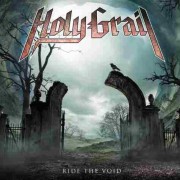 California based heavy metal group Holy Grail are streaming their entire new album Ride The Void for everyone to listen to before its release.  The record comes out January 18, 3013 under Nuclear Blast in Europe and January 22 under Prosthetic Records in the US.

Ride The Void will be Holy Grail’s second album, the first being 2010’s Crisis In Utopia.