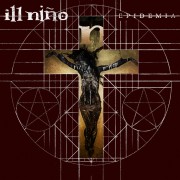 Latin influeced metalheads Ill Niño are streaming their upcoming album Epidemia over at Loudwire right now.  This is the band’s first album since 2010’s Dead New World and is due to be released on October 22 via Victory Records.

Drummer Dave Chavarri recently stated about the music on the record:

“This time around, we want to explore Latin and tribal rhythms we have never explored in the past five releases, giving us no musical boundaries at all.”