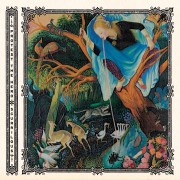 Protest The Hero will soon set off on a Canadian/US tour with Maylene & the Sons of Disaster and Tesseract starting at the end of March 2011.

More News On Protest The Hero: