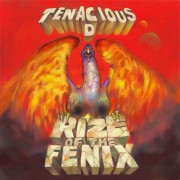 Alright, hopefully you’re ready for this.  While it’s not exactly metal, it has definitely got metal influences and even metalheads need to laugh sometimes.  So without further adieu, Tenacious D are streaming their entire new album Rize Of The Fenix right now.  Judging from the album cover we’re all in for a treat  The first D album was legendary, so lets see how this compares.  With songs like “We Fucked Their Asses”, you should have high hopes.

To listen to the album in its hilarious entirety click here.

Rize Of The Fenix is due out May 15, 2012 on Epic Records and will be the band’s third studio album.  If you have never heard them before, check their self titled first album as it is absolutely hilarious.