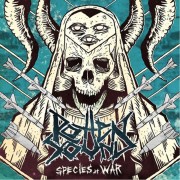 Finnish grindcore group Rotten Sound are streaming their new EP Species At War over at Inferno a few days before it is officially released.  The whole thing clocks in at less than 10 minutes so you might as well just listen to it.  Vocalist Keijo Niinimaa had the following to say about the EP and its release:

“Finding a strong label to release the EP and next full-length in Europe was our priority for [2012]. We are very excited about this deal with Season Of Mist and we can’t wait to get back on the road with the EP. Take a deep breath, get exhausted with ‘Species At War’ and see you at the shows!”

You can find Species At War streaming right here.

Species At War is due out January 22, 2013 via Season Of Mist and will be Rotten Sound’s first release since 2011′s Cursed LP. The EP was recorded at Nordic Audio Labs last summer while mixing and mastering was taken care of by drummer Sami Latva at Latva Studios.