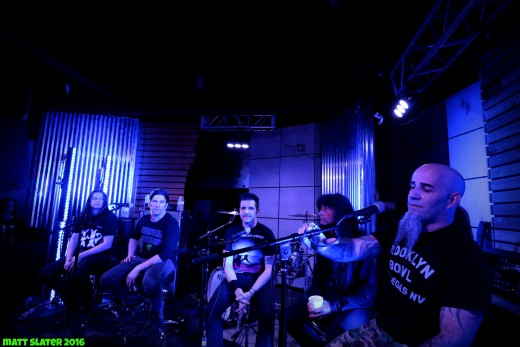 The Anthrax listening party for 11th album For All Kings at the excellent Butler, NJ based media and educational facility Architekt Music (Sevendust, Thank You, Scientist) was a real treat. A limited group of lucky fans were treated to lengthy and quite hysterical Q+A, delicious catering (I’d been wondering what the food would consist of due to the interesting varied backgrounds of the band members) and the first real taste of the triumphant latest album from the thrash greats. Truly one of the strongest entries in Anthrax history, For All Kings deserves a place in the collection of every metal fan.

Scott Ian came out and introduced the record joking that we had all gathered to hear the new Megadeth album before seriously thanking everyone and letting the room hear the epic and energized tunes. Huge choruses that showcase Belladonna’s considerable ear for hooks that could stand up with the Black Album but nonetheless still elsewhere pack an earlier thrash glory days reminiscent metal punch, massive riffs from the band ranging from almost Ministry-esque tight syncopation to classic metal leads and Priest influenced barn burners plus some of the craziest Charlie Benante drumming on wax to date add up to one serious contender. 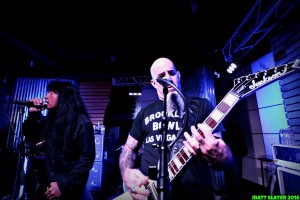 Fans had driven for hours for a taste of “You Gotta Believe”, “Suzerain” and the fierce “Monster at the End” and each new track during the listening portion of the night was met with stoked applause and cheering. I had reviewed the promo so was just having a blast air drumming along, but it was also fun to see the gathered true fans realizing how good and also heavy the record is.

After a too brief but rowdy and still very special set (cut short by some gear that exploded due to just too much damn metal), a brief bombast that included “Breathing Lightning” and a pummeling “Evil Twin”, the band relaxed and chilled out with the fans. The candor and interaction was very cool to see and shows why they have really become classy elder statesmen for the thrash genre. 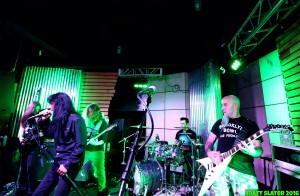 From Scott Ian discussing what songs he likes on State Of Euphoria to shouting out recent younger tour mates Power Trip and Deafheaven as proof metal is alive and well to Charlie telling a very cool story about Lemmy agreeing to sign five items of memorabilia after Charlie bumrushed him with a ton of his personal Motorhead collection once years ago to praise for new guitarist Jon Donais (Shadows Fall) and one fan causing laughs when he told Charlie that Lars was his favorite drummer, it was a very fun time.

It was very cool to finally meet Belladonna as well as have Frank Bello sincerely thank us as we left. We even had gotten some ideal parking from a nice Chinese dude at a nearby Laundromat. Thank you, NJ! And Go buy For All Kings. Everyone from Slash to Lady Gaga has been championing the release. Let’s help it chart some high early release numbers and get metal prominently up front on the charts! 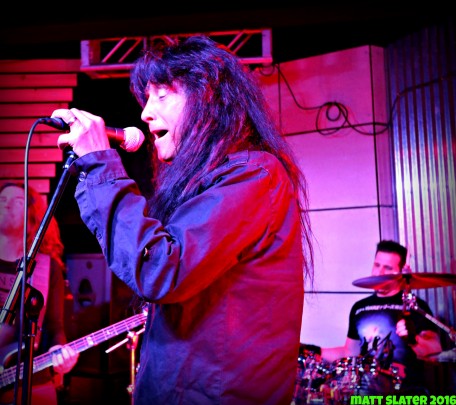