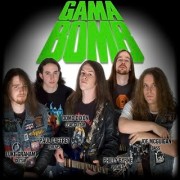 Irish thrash masters Gama Bomb have released the first in a series of in studio videos.  The video features the band recording in Dublin and has short previews of the new songs “Backwards Bible” and “Metal Idiot.”

You can find the video by clicking here.

This will be Gama Bomb’s fourth album and it is slated for an early 2013 release, so far it is untitled.  Vocalist Philly Byrne recently had the following to say about the album:

“We faced down a lot of challenges to make this album.  We’ve been through surgery, injuries, a member departing and the occasional dose of the shits, but we’re finally there and it’s sounding completely badass.  Some bands struggle to change themselves from album to album, but we don’t. Our aim with this album, just like all our other ones, is to do what we do even better.”[youtube]http://www.youtube.com/watch?v=tXj673GP7rM[/youtube]