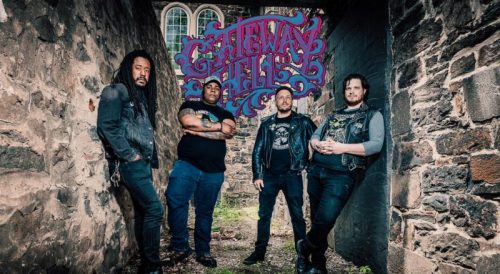 Maryland doomsters Gateway to Hell are streaming their newest song “Tin Roof” via The Obelisk.

“Tin Roof” comes off the band’s upcoming album Clovers due out later this month via Unholy Anarchy Records.

This is what the band had to say about “Tin Roof”:

“‘Tin Roof’ is our take on the dread conjured every time you turn on the TV news or pick up a newspaper. There’s an overwhelming sense that society as we know it is on a downward curve and that the ones up top are just completely oblivious as the world crumbles around them. The title is a shout-out to ‘Love Shack’ by the B-52s. We felt the pause in the song would be the perfect opportunity for Cindy Wilson to belt out the ‘Tin roof, rusted!’ from ‘Love Shack,’ so ‘Tin Roof’ was what we named the early demo tracks and it just stuck. We felt it fit thematically — years of neglecting the simple upkeep leading to a full collapse of the house. This song is about as political as we’ll ever get but we tried to be careful not to be too specific, as there’s nothing more boring than when a singer sounds like they are reading from a newspaper. As always, the riff comes first…”

Head over to The Obelisk to stream “Tin Roof” now.

You can also check out the title track over at the band’s Bandcamp page.

More News On Gateway to Hell:

More On: Doom Metal, Music, Gateway to Hell,
share on: