Get some new Sabbath merch to celebrate 50 years of the self titled and metal. 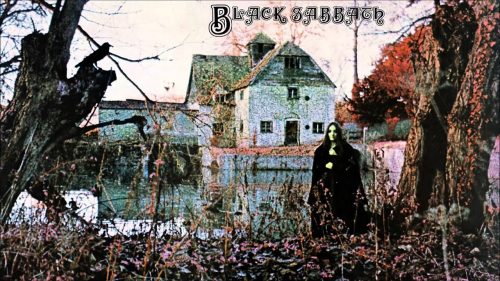 I was lying in bed reading a Grand Admiral Thrawn book and annoyed that my hot water is out, listening to Sabbath and Alice Cooper on Spotify and being kind of a lazy piece of shit when the guilt set in. Morgan, it is 50 years since Sabbath’s debut and you haven’t posted anything, you worthless poseur. The dark well from which all metal of value doth flow, the haunting grounds of “The Wizard”, the nativity in black. A warning to every sleeping village that music had forever changed. Zep never got so evil. Mentioning Mordor doesn’t come close to Sabbath’s shadows. What the hell was I doing running a metal site if I can’t get my ass up to praise the lords on this sacred day? So what if I smell bad and am wearing my girlfriend’s PINK sweatpants, even better.

Now I sit in front of the computer trembling in awe thinking of the power of that record and how amazing the fifty years since have been as not just pond ripples but tidal waves of influence have rolled out from those doomy notes. Someone on Twitter said Priest invented metal and I am sorry,  but…while they both had an early start Sabbath had five evil as fuck albums out before Priest even got Rocka Rolla (a good but comparatively wimpy album). Even if you were so insane as to discount the first 4 Sabbath albums as just heavy blues- which ignores “Children of the (fucking) Grave” on Master Of Reality, can anyone seriously look at the tormented person on the grim ass cover art of Sabbath Bloody Sabbath and hear the title track and say THAT isn’t metal??? Seriously?

Often imitated, never quite matched…the Sabbath legacy. Pick up some new merch today. You can’t just copy greatness and expect the same heights. On that note, why the hell does that band the Used with that dude Bert who used to date Kelly have a new album called fucking Heartwork?! Are you serious, dudes? Have you really never heard of god damned CARCASS!!?? Ooof. But I digress.

Anyway, God and the Devil bless Ozzy for still being here and still making rock n roll. Thank you Tony and all the boys and the long list of others attached to the band over the years. You all changed my life forever and the lives of countless others. Thank you.