Ghost B.C. frontman Papa Emeritus II is Running for Pope and the band has a brand new song streaming 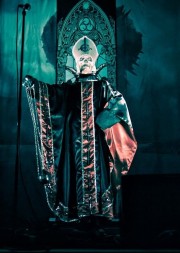 Those lovable Swedish satanists Ghost B.C. are at it again.  Frontman Papa Emeritus II has announced that with the recent resignation of Pope Benedict XVI, he will nominate himself to run for the title of Pope.  he has even set up a website where you can vote and in return hear a brand new song titled “Year Zero.”

To cast your vote and listen to “Year Zero” click right here.

“Year Zero” will be on Ghost B.C.’s upcoming sophomore release titled Infestissumam,  being released under the new label Loma Vista Recordings. This will be the follow up to 2010’s Opus Eponymous and is produced by Grammy Award-winner Nick Raskulinecz.