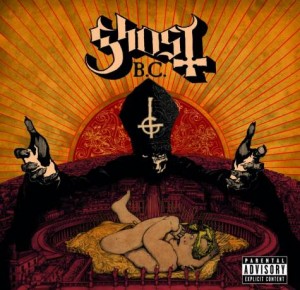 Mysterious doom metallers Ghost B.C. (or Ghost, as you still probably know them in Europe), premiered part one of their new documentary series called Papaganda.

Papaganda looks at the reign of frontman Papa Emeritus II and the future of the band. Director Greg Olliver had this to say:

“You can’t point a camera at Ghost without every frame of footage looking like heavy-metal gold. To work with a band that’s on a fast rise to fame and has a mysterious story which is currently unraveling requires an entirely different approach. Add in the anonymity of the group and the look that they have… and you suddenly have a whole lot to chew on as a director. The only downside is that I felt a bit silly on stage filming NOT wearing a robe and black mask.”

Filming for the series began earlier on the festival circuit and will continue through the year. Apparently a full-length documentary will follow after that.

Check out the Papaganda clip here.