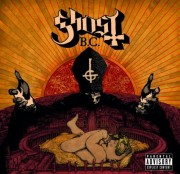 With the recent resignation of Pope Benedict XVI, Ghost B.C.  frontman Papa Emeritus II had announced he would run for the office and even set up a website where people could vote and hear a new song.  It appears he was not chosen.  Although the website is still up, so if you want to check it out it’s right here.