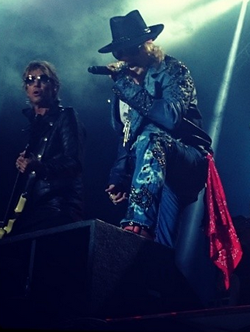 While bassist Tommy Stinson stepped aside for 5 shows for some reunion gigs with former band The Replacements., Guns N Roses got a well known fill in.

Filling in for Tommy was none other than original bassist Duff, beginning on April 6 in Buenos Aires, Argentina, and staying on for the remainder of the South American tour, including shows in Asuncion, Paraguay on April 9, La Paz, Bolivia on April 12, Recife, Brazil on April 15 and Fortaleza, Brazil on April 17.

Duff’s return saw many highlights, including the return of “Raw Power” and “Attitude” from The Spaghetti Incident  to the setlist, as well as opening with “You Could Be Mine” in Bolivia!  Click HERE for a video of “Live And Let Die” with Duff and more thoughts on GNR. This rules.

I don’t know about you guys and gals but I’ll still love GNR til my dying day.  That was THE band that got me into rock n roll. Lies is still a near perfect EP and I for one love the current line-up. Frank on drums in particular is the man and Tommy Stinson is a punk rock hero. I hated when Buckethead and Robin were in the band, nothing against them but a dude with a KFC bucket and someone so perfect for NIN just didn’t jive with my brain’s version of GNR. But I’m not so locked on the past I can’t respect the good stuff they do now. Sure, Axl isnt in the same shape he once was but he still writes great songs like “IRS” and “There Was A Time”. Ashba is a great guitarist as well, if he’d just lose that hat that makes everyone write him off as a Slash wanna be. But it couldnt be futher from the truth. Ashba is actually seriously talented. You can’t listen to SIXX AM and not hear that dude’s skill.

Thank God Duff was cool and Axl as well, cuz this was a real treat for fans who have stayed loyal. It is hard being a GNR fan sometimes. Honestly, I’d love to see the new band make peace with the old but for Slash and Duff to reunite Velvet Revolver and things become more copacetic all around. And the best thing Axl could do is bang out a dirty rock record that is a little more lean. Show your current boys you love them enough to get the band more exposure on a new GNR album and it also will help screw the naysayers. Bumblefoot is right in that regard! New music! Best way to shott down critics is to seem more like a band. The guys respect you, Axl. It’s still your show either way.

In other news, AXL ROSE is to be honoured on April 23 at the Golden God’s RONNIE JAMES DIO lifetime achievement award. Guns are scheduled to play 3 songs at the ceremony.