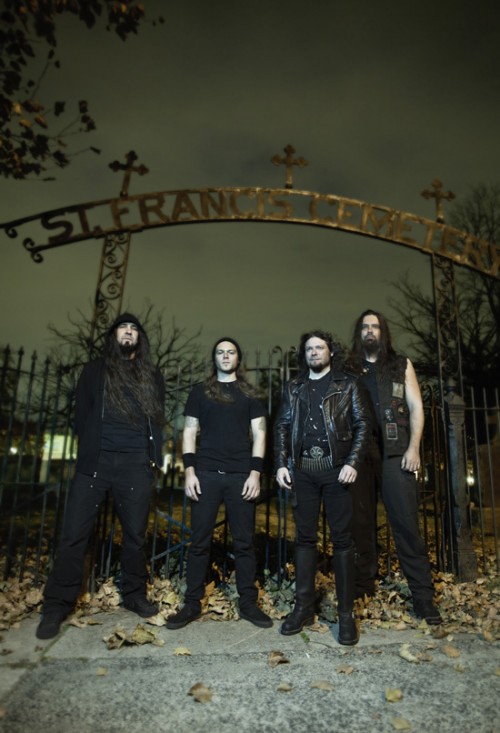 At times I listen to Goatwhore and think “Am I too negative? Is this a bit dark?” and then I think ,” No. This is just completely awesome.”

While I have never been as moved by Goatwhore’s music as any Acid Bath material like “Dead Venus Blue” or “13 Fingers”, my life has greatly benefited from Funeral Dirge For The Rotting Sun‘s brilliant and heady black murk. Or from seeing the band destroy years ago at the Joyous Lake in Woodstock, Ny with my friend’s Cirrhosis opening. A show John The Baker from Fucktard and Slimy Penis Breath/Instant Asshole helped book with our friend CJ. Good times. Also remember Ben walking around Relapse Contamination Fest at Trocadero one year while he was recuperating and being cool enough to give me a press quote even though we didn’t have a scheduled interview. Soilent Green and Goatwhore have always stood out and been loved, ever since Gia from Crisis got me into Soilent by always rocking their T-Shirts.

Also, Falgoust did a great tribute to Dave Brockie HERE.

Goatwhore‘s new album, “Constricting Rage of the Merciless,” is scheduled for release in North America on July 8th. Fans who see Goatwhore live on the road as part of the Metal Alliance tour will have the opportunity to reserve their copy of the CD at the band’s merch booth. Those pre-orders will include a special limited edition/exclusive album laminate and and exclusive t-shirt. The ONLY way to get the laminate and t-shirt is through this bundle at the band’s merch booth on tour! The laminates will include unique pre-order codes to enter on-line to have the album shipped right to the buyer’s door upon release of the album! Complete redemption instructions will be printed on the laminate.

“Constricting Rage of the Merciless” was recorded with producer Erik Rutan at Mana Recording Studios in St. Petersburg, FL. This is Goatwhore‘s fourth studio outing with Rutan at the helm, and to achieve an even more dark and powerful tone on this album, all drums, bass, and rhythm guitars were tracked to 2-inch tape! Fans will hear new music within the next few weeks at metalblade.com/goatwhore.

Erik Rutan commented on the recording sessions: “Working with Goatwhore again for our 4th album together was amazing! It is through our experience and established trust and bond in the studio that allowed us to push each other to the limits, only to achieve the best performances and tones we could. This album came out so dynamic and huge, partly due to the fact that we recorded drums, bass, and main rhythm guitars to analog tape. Goatwhore has a massive sound and we all felt recording to analog would be the best way to capture it, giving it a very unique quality and feel, built off of integrity and vibe. This is our finest moment working together and the guys did an incredible job creating and performing all the songs on this record. Goatwhore fans be prepared!”

Prepared. Now please tour near my apartment with Glorior Belli (and Texas Hippie Coalition, hahaha) so I can really swamp hell metal it up.

Tracklisting for the new Goatwhore is BELOW.