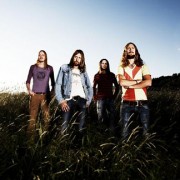 Graveyard has been hard at work since shooting their video for the song “Goliath.” The band is now at work on the set of their new music video for their song “Endless Night.”

To read comments from the band regarding the video click here.

The band had these comments to make regarding the new video:

“The boys in the ‘yard are heading back to Stockholm to wrap yet another video – this time for the song „Endless Night“. Without giving away too much there will be a touch of Alfred Hitchcock, it will involve nighttime activities and last but not least Joakim will be back on vocals again for this one. Expect the unexpected, but with a title like “Endless Night“ you’re in for something to remember … Lights out.”

The album Lights Out is set for an October 26th release date via Nuclear Blast Records.

As soon as the new video is out we will have it up and running on here, check back for details.