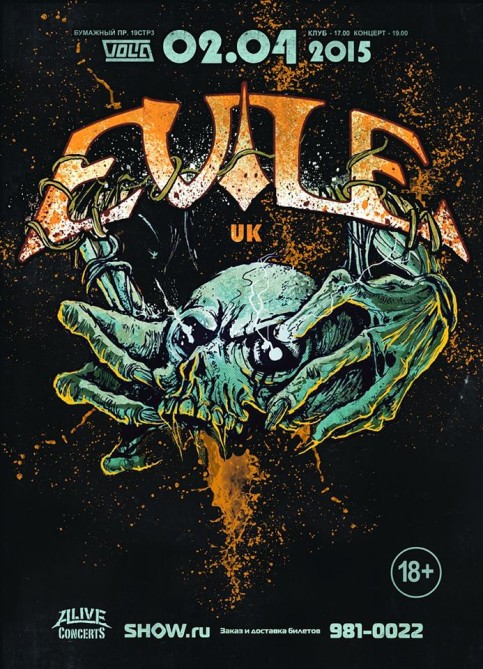 More shows announced by the  Evile camp.It is great to see the band get back on their feet yet again. One of the most consistently killer thrash bands in the world!

“Evile are coming back next year, we’ve been hard at work over the past few months with Piers, our new guitarist, to get up to speed with putting a great set together for our first show back at one of our favourite venues (so much of a favourite I named a song after it!), the Underworld in London, on March 28, 2015.

We’ve still got a lot of work to do in the coming months to make sure we can be better than we’ve ever been but we’re treating this as a new start, I always hoped (idealistically) that Evile could be a band that kept the same members for as long as we lasted but obviously there are some things you just can’t fight or plan for and life just isn’t that straight forward.

We want to make sure we put the time in to be stronger than ever but we can only all manage to be available at the same time for one or two rehearsals per week which is why we haven’t rushed straight back out there. We need to put the effort in to be as good a live band as we want to be, that’s what we’re aiming for starting next year. This time we are going the DIY route, we have no label or manager. Just ourselves and whatever stage people will let us play on.

We finally get the chance to tour in support of our last album Skull which we released through Earache in May 2013, sadly we never got a chance to promote it properly so it seemed to fly under the radar for a lot of people so we plan on playing that album in full at shows next year as we’re really proud of what we put together on that one and think it deserves it’s time in the spotlight.Check out the rest of the dates we have booked in for next year and we will see the London faithful at the Underworld on March 28 for the resurrection of Evile.”