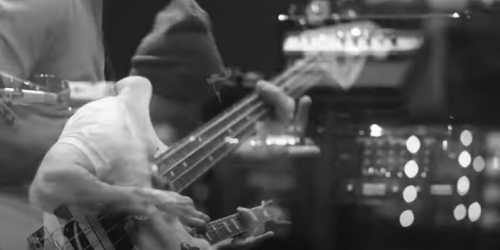 Greg Puciato, whose recent streaming event, “Fuck Content,” merged the worlds of recording and performance, has released a video for “Don’t Wanna Deal” (https://youtu.be/h9A1nVA-O5Q), a song whose creation was chronicled in the film.

Puciato said of the new track: “I ‘Don’t Wanna Deal’ with having to come up with something to say about this song or video clip so I’m not gonna.”

The 16-track Fuck Content album features five new songs not available on Puciato’s critically-acclaimed solo debut, Child Soldier: Creator of God, as well as live versions of ten of the album tracks. While all vinyl variants have now sold out, a collectible Blu-ray is currently available, as are limited-edition, Jesse Draxler-designed merch items (https://federalprisoner.shop/). Both the film and album are available digitally, with downloads available directly via the Federal Prisoner webstore, and album streams available across all major platforms.

Fuck Content is a reflection of where Puciato is in his post-The Dillinger Escape Plan life. He recently celebrated the release of Killer Be Killed’s sophomore album, Reluctant Hero, with the band landing on the covers of both Revolver and Kerrang!. The album also debuted atop the iTunes Rock and Metal charts. His solo debut, Child Soldier: Creator of God, arrived the previous month, with Consequence of Sound saying the 15-song album delivers “an experimental yet heavy sound that echoes Puciato’s versatility as an artist.” Puciato released four videos to accompany the release: “Do You Need Me to Remind You?” (https://youtu.be/d7Iaw_wjhaY), “A Pair of Questions” (https://youtu.be/VgCMGAvurl0), “Deep Set” (https://youtu.be/sJhPsE6K5t0), and “Fire For Water” (https://youtu.be/kcq8ooRTRpw). In addition to writing and recording two high profile releases, Puciato surprised fans at the end of last year by joining Alice in Chains’ Jerry Cantrell for a pair of special performances.