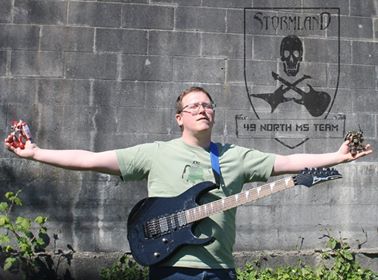 The excellent Incident Report: UC​-​0791227 propelled the one man Gundam-themed death metal machine known as Stormland from British Columbia into the ears of quite a few more death metal minded folks.  Justin from Stormland also performed the music on one of my favorite songs “Miracle Drug” on one of my own albums released this year and is just an awesome dude and supportive, real friend. Homie can also really wail the shit out of a guitar and is growing stronger with each release (“Contact” fucking slaps). This project really has legs to be a cult favorite if the releases continue.  Fallon Bowman and Jacob Frebe even make appearances on the recent EP.

Anyhow, we know Justin lives and breathes music and family and so we thought he would be the perfect choice for our Guest List Year End list this year. Here are my dude’s personal choices for his favorite 5 releases of this dwindling to a close insane year.

1) Allegaeon – Apoptosis. It continues to blow my mind the leaps that Allegaeon makes from album to album. You can practically hear the “level up” chime whenever the first single for a new release comes out. The songcraft and musicianship are always ace, and both guitarist Mike Stancel and new bassist Brandon Michael shine throughout. Apoptosis is a magnum opus of an album.

2) Babymetal – Metal Galaxy. While far more overtly pop than Metal Resistance, it’s still a strong,strong album. Yes, singles like “Elevator Girl” and “PA PA YA” are strong, but they’re not the stars. Deep cuts like pop radio-ready “Brand New Day” and the powerfully groovy “Kagerou” are where the album shines.

3) Ithaca – The Language of Injury. Beyond proclaiming themselves the new Masters of the Alarm Clock Riff, Ithaca’s debut longplayer is one of the most emotive albums I’ve heard all year. The rage and despair are palpable on songs like the title track and “Better Abuse.” It won’t shock me to see Ithaca become a staple on my personal AOTY lists for years to come.

4) KMFDM – Paradise. This came out of nowhere for me. I was not expecting new KFMDM in this, the year of our Lord, 2019. And yet here we are, and here it is. And it is good. It’s probably the strongest album, front to back, they’ve put out since the 1990s. It will make you smile, it will make you dance, and it will keep you angry at the ongoing fascist creep going on in our world.

Yup, KMFDM, as always, is Antifa.

5) Memoriam – Requiem for Mankind. A tighter album than 2018’s The Silent Vigil, Memoriam knocked a minute or two off the average song length for a leaner and meaner third release. This is death metal the way I likes it: With stomp, a bit of melody, and a sense of constant forward momentum.