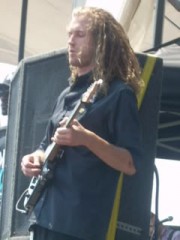 Yet another change to the line-up change comes to LA’s prog metal band The Human Abstract. The band announced that guitarist Andrew Tapley is no longer a part of the band. Taken from their faceboook, the band states: “As some of you may have heard already, Tapley will no longer be playing in The Human Abstract. We love Tapley very much and we will support him in all his future aspirations.”

This came as no surprise to few, for there was much speculation swirling about his departure. He also issued a comment on his facebook stating: “As some of you know and many have been wondering, I will not be playing with The Human Abstract anymore. This wasn’t decided by me; however, there are no hard feelings. Thanks to everyone who supported the band these past few years and to all the wonderful friends I had the pleasure of meeting. I will be in Los Angeles continuing with music; art is long and time is fleeting –see y’all soon!”

The Human Abstract have recently been shuffling their deck of members. Former founding guitarist A.J. Minette returned to play and produce their newest release “Digital Veil” which is due in stores March 8th on E1. Also, keyboardist Sean leonard is out and vocalist Nathan Ells has been replaced by The Color of Violence and former From First to Last guitarist Travis Richter.

More News On The Human Abstract:

More On: Progressive Metal, Break Up, The Human Abstract, E1 Entertainment
share on: