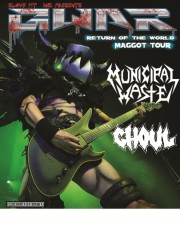 The scumdogs of the universe themselves, GWAR, have announced they will be returning to the road for part two of the “Return of the World Maggot Tour”.

This will be their first time playing live since the tragic death of guitar player Cory Smoot, AKA Flattus Maximus.  A North Dakota coroner officially ruled Cory’s death to have stemmed, “from a coronary artery thrombosis brought about by his pre-existing coronary artery disease.” Click here to read more on Cory’s tragic death.

The tour will be kicking off Friday March 16th with a special memorial show in Richmond, VA at The National Theater. The proceeds will be going to a charity that has been set up to benefit Cory’s widow and unborn child called the “Smoot Family Fund.”  Other bands joining the tour will include Municipal Waste, Ghoul, and Legacy of Disorder.  Tickets will go on sale Friday January 27th and more shows are being added.

Oderus Urungus had this to say:

“All the years of doing GWAR could never have prepared us for what we have been through, and I want to thank the metal community and the extended GWAR family for all of your support. Finishing that last tour was the hardest thing we have ever had to do, and we still have about half of the country left to hit. We will continue as a four-piece, with the special tribute to Flattus at the end of the show, in order to give our fans a chance to say goodbye to our fallen Scumdog brother in true GWAR fashion-covered in blood and rocking the fuck out! After this tour is over we can start looking to the future and begin to put this tragedy behind us. But for now we are still in “Hail Flattus” mode!”