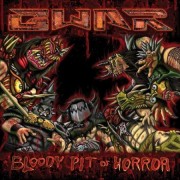 Aaaahhhh GWAR, they’ve always been a kind of love ’em or hate ’em type of band. Personally I love them, but I will admit to being somewhat of a fanboy when it comes to these kooky alien warlords. I am not delusional though and I can easily concur that GWAR have released previous albums that range from great, to good, to plain bad. Things seemed to change though with 2001’s Violence Has Arrived. The guys seemed to have matured some, both musically and lyrically. Of course there will always be the comedic gross out factor that GWAR brings to the table, but the approach to VHA seemed more focused, more visceral than they had ever been before. Thankfully it appears that this was no fluke for War Party, From Hell, Lust in Space, and now Bloody Pit of Horror have all proven to be the spawn of a more lethal, more metal GWAR.

Bloody Pit of Horror is a mini-concept album encompassing the first four songs. The tracks all have their own distinct vibe and musically flow right into each other as they tell their bloody tale. The tale itself, about a zombie army overtaking the world, is quite played out in metal and in horror in general, yet GWAR weave their magic wonderfully as it is told quite well and is very enjoyable. Part One – Zombies March features that modern thrash groove that has been so prevalent on GWAR’s last few albums. Not only is the song catchy as hell, but the lead work of Flattus Maximus (Cory Smoot) shows a blues influenced style that is very effective in this song and in the scope of all GWAR songs. It also had me rolling at its pot-shots at Twilight and True Blood with the mention of gay vampires and biker werewolves. Part Two – Come the Carnivore is a short, slow, doom styled song that showcases a droning Oderus Urungus (Dave Brockie) before melding seemlessly into Part Three – A Gathering of Ghouls where the thrash once again picks up and Oderus unleashes a seething vocal performance. Part Four – Storm is Coming rolls in without the mention of a musical pause and proceeds to thrash and bash your face in. The concept is quite successful and makes me think of Deceased’s Fearless Undead Machines in the way that the musical presentation really fits the lyrical story very well and is executed even better.

The albums next few track are really good, if not pretty standard affairs for the GWAR of the last decade. Tick-Tits will definitely put a smile on your face, especially when you hear lines such as “tick tits, oh tick tits, please clean out your gash”. Beat You to Death features Beefcake the Mighty on vocals and has that punk-thrash feel to it that is so familiar with other Beefcake fronted material from the past. You Are My Meat is really nothing special musically, but it did make my wife claim that GWAR have officially offended her lyrically (finally!!!). Hail Genocide and KZ Necromancer step things back up with some mid-tempo to blistering thrash numbers that get the old blood pumping. The albums last two tracks kind of drop the ball in the hard hitting department. While the songs are not bad tracks by any means, they do not really offer anything musically that stands out. In fact, the best thing about The Litany of the Slain is the mention of all the victims/characters that GWAR have introduced and killed over the last twenty plus years of touring. Sick and Twisted closes out the album in standard GWAR fashion, yet has a fade out ending that simply doesn’t work and leaves the song and album sounding a little unfinished.

Produced by Cory Smoot and mastered by Alan Douches, the album sounds terrific and honestly one of my only real gripes is that the album’s artwork is awful. This is something that has always plagued GWAR for the most part, but after so many horrendous album covers I’m beginning to think they could care less. All in all though GWAR has produced a really good album in Bloody Pit of Horror that can easily set right next to Scumdogs of the Universe and the last four albums as being Gwar’s best.