GWAR is working on a new album

Its not much information but the Scumdogs of the Universe, GWAR, have released the following statement:

“Like any band worth its salt, GWAR is constantly working on new songs. What’s different now is that the band has its own in-house recording studio/jam space, so everything they do is tracked. There is no release date, no gory details but rest assured of one thing… GWAR is working on a new album, and it will be a tribute to their lost Scumdog brother, Flattus Maximus!”

As some of you may know GWAR’s guitarist Flattus Maximus aka Cory Smoot passed away  on November 3, 2011 due to a”coronary artery thrombosis brought about by his pre-existing coronary artery disease.” Out of respect for Smoot GWAR has retired the Flattus Maximus character and will beholding a benefit show in Richmond, VA at the The National Theater on Friday, March 16 before continuing on their Return of the World Maggot tour. All proceeds for the show will go to the Smoot Family Fund, a charity set up to support Smoot’s widow and unborn child. GWAR will be joined by Municipal Waste, Ghoul, Legacy of Disorder and Suppression.

You can view the flyer here. 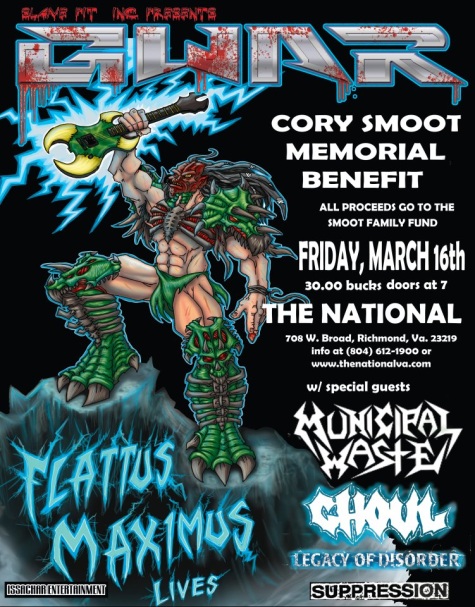