Hail to the real king. King Diamond announces US tour 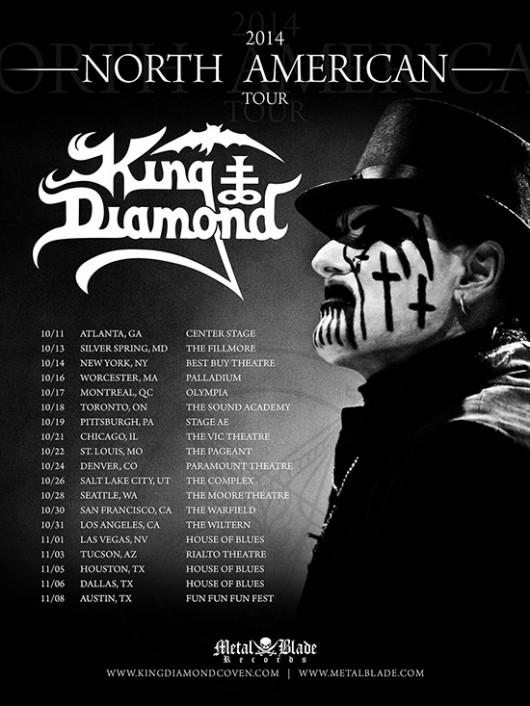 “I am aliiiiiive inside your wife”!!! King Diamond is the greatest vocalist left now that Dio is gone, and the King will once again finally set his bone mic stand down on these darkened shores. I saw him years ago at BB King’s in NYC with Nile and it is to this day one of my fondest and creepiest concert memories. Here’s hoping he plays some of the awesome Give Me Your Soul…Please cuts amongst classic material like “Tea” and “Abigail”.

The long-awaited trek will commence on October 11th in Atlanta and wrap up with the previously announced performance at Fun Fun Fun Fest in Austin. A limited edition KING DIAMOND jacket will be available through the SHOWstubs.com fan club presale, which begins tomorrow, June 24th. Tickets will be on sale online and at box offices nationwide on Friday, June 27th.

KING DIAMOND will be joined on stage by longtime band members Andy LaRocque (who writes the greatest guitar solos in all of metal), Mike Wead, Hal Patino, and Matt Thompson. Additionally, North American fans will bear witness to the band’s full European festival stage show!. These will be the most ambitious and largest North American productions of the band’s entire history. A special guest support act for the tour will be announced in the coming weeks. Everyone is expecting it is Judas Priest but I’m not so sure they’d want to play second fiddle here, Halford being a metal god and also pretty much tied for first place with King as the greatest, haha.

Click HERE for tour dates! I’m going back to the couch to watch Penny Dreadful now and get stoked when they show a tea cup full of blood in the opening credits. Graaaaandma!!!!!!!!!!!!!!!!

And Click HERE to see a recent entry in our Deep Cuts series (exploring lesser known tracks from great bands) on King as well!!!